The Origin of the Chocolate Martini

Rock Hudson drinking beer a year before his martini invention

While filming Giant in Marfa, Texas, Rock and Elizabeth Taylor lived in rented houses across the street from one another. They became close friends and often spent time together in the evenings. One evening in 1955 they invented the chocolate martini.

They both loved chocolate and drank martinis. Why not put chocolate liqueur and chocolate syrup in a vodka martini? They thought it tasted terrific and they had made a great contribution to society until they began to suffer from indigestion. “We were really just kids, we could eat and drink anything and we never needed sleep,” Rock said.

– Excerpt from Rock Hudson: His Story 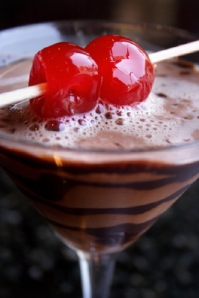 Over 50 years later the chocolate martini, or chocolatini, is still served at bars and enjoyed by many a chocolate lover. It’s also a popular Valentine’s Day alternative to champagne or wine sure to be on many menus this weekend. I wonder how many fans of the drink know the Hollywood origin behind it?

2 Responses to The Origin of the Chocolate Martini